14 Days of Love Kicks Off with Vonna Harper!

Vonna Harper kicks things off for us in the 14 Days of Love.  She share her oh so romantic, first boyfriend memory and an excerpt from one of her hot books.

You're going to want to comment ....Vonna is offering up on of her ebooks to the lucky winner drawn from the comments!
Here's Vonn!


Ah, first boyfriend. I remember Bill well. Of course I did. He was my first true love, my heartthrob, the boy I thought I’d spend the rest of my life with. Or maybe not.
To set the stage, my mother, sister, and I were living in a rural farming community and Mother was THE only teacher in an honest-to-goodness one room schoolhouse. I’d reached the lofty pinnacle of my experience there—an eighth grader. There were three students in their last year before heading for high school and the other two were boys. Think about what that meant! I was outnumbered two to one. I had two boys to choose from. Okay, okay, so my existence didn’t revolve around the opposite sex back then. I found my horse and her foal much more interesting. However, my body was starting to take on some female contours. Along with that came the hormones. The two boys who before now had no purpose in my life except to anchor the school’s baseball team were starting to look interesting. Which would it be? Quiet, studious, and gangly Bill or Clay, the non student whose father was in jail? Fortunately I saw past Clay’s broader shoulders, in large part because I was tired of helping him with his schoolwork.
So Bill it was. And wonder of wonders he was interested in me. How did I know? Simple. He invited me out to his parents’ farm to see the baby pigs. Of course I was a sucker for any and all baby animals so off I went. Bill pointed to the little ones on the other side of the fence. Before he could get a word out, I was through the gate and heading for the piglets. I snagged one and held it to my mostly flat chest. That’s when the little bugger peed on me. Just then Bill yelled and pointed. Mama pig was charging! Dropping the ungrateful side of bacon, I raced for the closest fence and started wiggling under it. The next thing I knew I was flat on the ground in the mud because my back had touched an electrified wire. Gallant Bill grabbed my hands and pulled me free. There I stood with a mix of mud and pig piss on my clothes. How can a farmer’s son not love a gal like that?
But our first date wasn’t over, oh no! Now dressed in his father’s old T-shirt, I steeled myself for the next chapter—turkey killing. I’ll spare the details except that I didn’t need to see many turkey heads chopped off to realize I wasn’t made for the farming life. Sigh. Guess Bill and I weren’t meant to be. The last I heard, he’d taken over the family’s ranch, was married to a woman whose baked goods were grand prize winners at the county fair, and had several children. Sadly, he was losing his sight so probably he’ll never read any of the romance and erotica the girl who got away writes. Hmm. I wonder if he knows.
Tagline: One determined and grieving woman, two powerful shape shifters 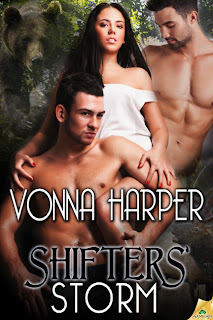 Blurb: Horrified by her mother's murder, Rane returns to the isolated mountain community of her childhood. Nothing, not even law enforcement's warnings, will deter her. She will learn who killed her mother and why. But she needs help from her elk shape shifter lover, help that will have to wait until after rut season. The mountains hold more than a killer or killers. There's a newcomer, a massive grizzly shape shifter with his own need—for Rane.
And here’s an excerpt.
A grizzly.
Couldn’t be! The breed hadn’t been seen in Oregon for decades.
But it was.
Even as she noted the thick legs, small ears, long tapering muzzle and take-no-prisoners body, something else occurred to her. The beast’s full attention was on her, which meant he wasn’t aware of any other humans in the area. Much as she relied on her own senses, she had even more faith in his, and he was telling her she had nothing to fear from one of her kind.
Her safety where he was concerned was a different matter. She could die today, a victim of claws and fangs. The rifle she’d hauled up here was probably worthless. If she hit it, all she’d do was make it mad.
Could she turn tail and get the hell out of here?
The strongest gust of wind so far brought her a metallic stench that sent shock through her already overloaded system. Blood. A lot of it. Undeniable proof of a savage death. More information sorted itself out in her mind. Whatever had died was pretty big. There was something stale about the smell, which told her the death hadn’t happened within the past few hours.
Her nerves tightened, and her awareness tunneled until only she and the bear existed. Lowering itself back onto four legs, it woofed.
Didn’t expect to see you here, it seemed to be saying.
“I didn’t expect to see you either,” she whispered.
“Don’t be afraid.”
Her heart lost rhythm, then reset itself. If she’d been anyone else and didn’t know about the rare creatures that called the Chinook Forest home, she would have been convinced she was hallucinating.
“I don’t want to be,” she admitted.
“Come closer.” The grizzly briefly turned his attention to the carcass. “You need to see.”
Driven by a force she didn’t comprehend, Rane started toward what in essence was a killing machine. Even if it charged, she doubted she’d shoot because the grizzly was at home in a forest where it no longer belonged.
Her legs felt strong, and despite the uneven ground, her hips moved effortlessly. The combination of smells became more complex and deeply layered. Everything in her said she was supposed to be doing this insane thing. Erasing the distance between her and the great, rich-coated creature was all-important. As a Forest Service employee specializing in wildlife biology, she’d seen a grizzly up close, but that one had been drugged. Helpless.
When maybe fifty feet separated her from the massive beast, she dug her boots into the soft ground. She felt disconnected from herself and reality as she untied the backpack fastenings around her waist. If she was wrong about the connection between her and the bruin, she’d never be any older than today. Holding the rifle with first one numb hand and then the other, she slipped free of the pack’s weight. Momentarily unbalanced, she concentrated on standing upright. Once her equilibrium was restored, she again assessed the scent coming from the creature. She knew what a bear smelled like. This one was that, all right, and more.
http://store.samhainpublishing.com/shifters-storm-p-6412.html
www.VonnaHarper.com
A touch, and more, of erotica
Posted by Lizzie at 5:08 AM

Oh my goodness, that is some real life story for ya. It had me laughing, just picturing it. My first boyfriend story is soooo boring compared to that.

Enjoyed your memory, you made me laugh.

^Tho sure not funny at that time.. Sure gave me some good chuckles ;-D
^Only way to make it worse: Mucking Barn{cows & horses} trying not to be kicked or bitten. Cleaning out Chicken Coop, with territorial Rooster chasing after or Feeding Geese, with whole gaggle try to take out chunks{won't mention Gelding}
^Before lost, family farm {3rd generation} had livestock, dairy & multi-crops! So, know of these
well!