Happy Valentine’s Day all!  The day of love created by the card companies and floristists to keep them in business is exactly that, big business.  But some, especially men, need that little push to get around to a moment of ‘romance’ from the female point of view.  I saw a statistic this morning that 53% of women would dump their boyfriend if they don’t get any kind of gift.  Having been in situations where the only time I received a romantic gesture it was centered around sex, I can see that.
But things have changed thanks to the current man in my life.  We’ve been together almost eleven years and the first kiss curled my toes.  I’m delighted to report the kisses are still toe curling and throughout the year he surprises me with little gifts.  They may not be roses (I grow them) or candy (thank goodness…still working on that ten pounds), but they are items he knows I have been on the fence about getting for myself.
Yes, the little gifts are nice, but the thing he gives me that means the most is…his support.  He’s willing to go to book signings and carry any boxes of stuff I decide to haul with me.  To attend my families ‘get togethers’ without grumbling and even help clean house when we host.  He doesn’t complain if I say I have to work because of a deadline or I’m on a chat and he needs to fend for himself.  No, he encourages me to do what I need to do to accomplish my dreams, my goals, even going to conferences while he keeps the home fires going and he’ll be there waiting for my return.  To me, that’s worth much more than any of the things he buys, no matter the day or month.
So share your thoughts on Valentine’s Day…do you look forward to it, hate it or is every day Valentine’s Day in your life?  Your comment also enters you in today’s drawing “FUN” prize.  Make sure to leave your email so I can contact you on instructions to receive your prize.
Since it is the day of love, here’s an excerpt from the award winning historical, Making Christmas.  Yes, I know the story takes place during the wrong holiday, but love blooms no matter the season and even during times of war. And as this excerpt shows, it can start in the most unusual circumstances.
MAKING CHRISTMAS 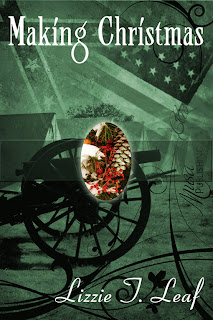 By Lizzie T. Leaf
Published by Musa Publishing
Wounded in a skirmish, Callie Marsh’s disguise as a Confederate soldier is discovered by the doctor who treats her.  Working with him in the hospital she learns no matter what color uniform a soldier wears, they all miss family during the holidays.  And that an enemy doctor can be the man of her dreams.

Dr. Tom Kent knows the safest place for the woman is working by his side.  Their constant interaction has him wanting more than is smart considering their division of philosophy. His determination to keep her safe is hindered by Major Henry Ash’s decision the young prisoner would make an excellent aide could put her in danger of discovery.

Will Callie be able to set aside her dislike of Yankees to make Christmas for the enemy and especially for the man she’s come to love?
Excerpt:
Thomas Kent filled his tin cup with a stiff shot of whiskey and slipped the bottle back into its hiding place at the bottom of his satchel.  He’d never been much of a drinker before he joined the Union Army.  Now the haze of alcohol was the only way he could get any sleep.
What had possessed him to give up a thriving medical practice in Maryland?  His fiancée had asked the same question in the one letter he received from her.  She didn’t bother to wait for his answer.  By the time he sat down to attempt to explain his determination to help save the Union, Beth married the shopkeeper in their small town.
The last gulp of the rot-gut tasted no better than the first, but it didn’t matter.  Since they’d left the devastation of Atlanta, he’d gone through most of the stash he’d brought with him.  With luck, the scavengers who went out each morning to purge the countryside would find a still.  Granny’s hooch was better than nothing.
Whoever said “war is hell” had it right.  Even if he wasn’t on the front lines facing life and death, he dealt with the results every day.  The blood, the gore and the death.  Some he could save; a lot of others he couldn’t.  Those were the ones who kept him awake…them and the others who said they wished he’d let them die instead of taking their arm or leg.
Emptying the cup, Tom reached down to the bag beside the table he used as a desk.  Shouts for Dr. Kent stopped him from pulling out the bottle his hand had been clasped around.
“Doc, we got us a wounded Reb here.  Just a kid really.”  Sergeant Johnny Oaks entered the medical tent with a young boy thrown over his shoulder.
Poor kid didn’t even earn the luxury of a litter.
But litters weren’t carried by scouting patrols.  They needed to move as quietly and unnoticed as possible.
“Yeah, I told him not to bother, but you know how stubborn the sergeant is.”  Corporal Sam Jones swiped a blood-crusted hand across his mouth, leaving a streak of blood, and looked in disgust at the sergeant.  “I mean if the kid don’t bleed to death, he’s going to wish he had.  Not only did he take a couple of bullets in the shoulder, but looks like he lost some of his man parts too.  Think I’d rather be dead than gelded.”
“Put him over here, Sergeant.”  Tom ignored the corporal’s comments and moved the stack of blankets from the cot where he wanted the boy.
Sergeant Oaks eased the kid down and Tom saw what Jones meant.  Blood dripped on the dirt from the injured arm.  Tom made a mental toss on which needed attention more from blood loss…the arm or the splotch of red covering the front of the boy’s pants.
“If it’s okay with you, Doc, I’m going to see about getting a bite to eat.  We were gone longer than anticipated and ran out of rations.”
Tom nodded and Sergeant Oaks headed for the tent entrance.  Jones, on the other hand, craned his neck for a better view.  Some people were attracted to gore, a side of human nature Tom didn’t understand.
“Thank you Corporal.  You should probably join the sergeant and get something to eat.”
“Yeah.”  Jones hesitated and disappointment registered on his face that he wouldn’t get to see how bad the damage was to the boy’s private parts.  He cast a glance in the doctor’s direction and shrugged.  “Guess I’ll do that.”
Tom pulled the tent fly closed behind him.  Jones would be spreading the news and a bunch of prying eyes weren’t needed.
Alone with his patient, Tom laid out the instruments he thought would be needed:   sharp scalpel, the prod to fish for bullets if necessary, strips of cloth, a bottle of ether and opium for the pain if the kid came to.
He pulled the stool he used to work on patients up close to the low cot.  He studied the boy for a brief minute then sprang into action.
Might as well start here.  The shoulder looks pretty bad and is bleeding more than his other wound.
Tom didn’t waste time unbuttoning the shirt.  He ripped it open, scattering buttons onto the dirt floor of the tent.  If he was honest, he was delaying his examination of the mutilated organs between the boy’s legs. He needed time to adjust to the idea.  He’d never had to remove someone’s manhood before and the thought made him uncomfortable.
“What the—?”
Buy link: http://www.musapublishing.com/index.php?main_page=product_info&cPath=8&products_id=61
Also available at Amazon Kindle, Barnes & Noble Nook and All Romance eBooks for ebook readers.
Follow what Lizzie’s up to at these sites
www.lizzietleaf.com
http://lizzietleaf.blogspot.com/
http://www.facebook.com/profile.php?id=826769827
http://twitter.com/lizzietleaf
Posted by Lizzie at 5:46 AM

Happy Valentines Lizzie! Yes, my man is the same supportive man as yours. It sure feels nice to have some one to cheer you on and sincerely love what I'm doing! I couldn't imagine life without him!

Great post!! And this has been a great blog series!! Loved the excerpt too, especially where you chose to end it.

I am also going to give a shout-out to my sweet husband who still doesn't understand my need to write, but hangs in there with me anyway.

Thank you, Abigail! Happy V-day to you too!!!

Lisa, you lucked out with you man...he's a good guy. Just took a little growing for both of you to know you were meant to be!

Thank you, Arley. Glad you enjoyed the "Love" series, it's been fun.

Sounds like you hit the jackpot with your hubby too!

Ok Liz, you’re killing me here!!!! You needed to make the excerpt longer. LOL. I was really enjoying it!!! About Valentine’s Day. My hubby presented me with a gift card to Yankee Candle. Smart man. He knows how I love candles and I do appreciate him taking the time to trudge through the mall to get it (he hates the mall). It’s sweet of him to think of me, which he does often,.. when he,.... helps unload the dishwasher, fold a load of towels, stop at the market for the butter I forgot, or give me a neck and shoulder massage when that darn headache creeps up on me. Truthfully I have to say I have Valentine’s Day all the time. There are so many little things he does all the time that says I LOVE YOU throughout the year.
fshasm@cableone.net

Shonna, sorry about killing you on the end part...not! ROFL
Sounds like your husband is a keeper too. Isn't it wonderful to have someone in your life that doesn't just take, but gives in return!

The winner is Abigail-Madison Chase!

Abigail, give me a shout at lizzietleaf(at)comcast(dot)net with your info to get your prize.