I’m especially delighted with today’s guest…J.L. Bowen shares not only her memories of a first kiss, but also a peek into her debut novel into the Young Adult genre with The Healer, a dark paranormal that sent shivers down my spine in a lot of the scenes!  Yes, I had the honor of reading the book in its formative stages.


Don’t forget to leave a comment to get entered into the drawing for ‘wing necklace’ as well as a flashlight and pen.
J.L. Bowen’s First Kiss
Happy Valentine’s Day everyone!  I’m excited to be here.  Lizzie asked me to write a story about my first kiss which by the way was when I was thirteen year’s old.   I had pecked boys on the lips, but my first French kiss, was with Chris Ward.  He had long dark black hair, and he kissed me behind my parents’ garage during the summer.
I had never experienced anything like this before so having some guy’s tongue in my mouth was both scary and thrilling.  I had no idea what to do and I don’t think he did either.  I even remember what he was wearing – a red football jersey and Levi 501 jeans.  Chris wrapped his arms around my waist and held me close to him.  We were young, scared and stupid.  Nothing happened beyond the kissing.
Writing about this brings back memories.  During middle and high school, I never stayed with guys very long.  In fact, I know I broke some hearts along the way.  Believe me, I had my share too.  I always seemed to want I couldn’t have.  Looking back, I had a difficult time getting past the lust stage, but once I got someone, I pulled away.  Why?  To be honest, I was scared.  Besides Chris who was definitely a cutie, I ran anytime they got too close.
So, when I look at my writing, my fears sprinkle on to my characters.  In my new release, The Healer, my hero, Armond Costa, has his fair share of fears.  Also, he’s never been kissed either, well that is until he meets Cadye.    He fumbles with her like Chris did with me.
Here’s a small glimpse of his interaction with Cadye.  It’s small, because there are some spoilers around it, so I didn’t want to give it away.  Cadye is a Golden Demon and Armond has a crush on her.
The door cracked opened. “Um, is Armond here?” Cadye asked.
I sat up and wiped my tears. “Yeah, I’m here.”
“Hi,” she said. She glanced at Rusty who gave her a you-are-dead stare.
I glared. “Rusty.”
“What?”
I nodded my head.
“I’m not going anywhere,” he said. “Abrianna said this is my room, too.”
“Fine, then we’re going on the balcony, and you’re not coming out there,” I said.
“Whatever.”
I motioned for Cadye. She looked at Rusty one more time, but ran over to me. I led her out on the balcony.
We both stared at the setting sun. Her scent of jasmine whiffed over me. I wanted to lean over and breathe deeper, but refused to move.  She had on a tight red sweater with a heart shaped neckline and I couldn’t help but gaze at the hollow between her breasts.  Heat rose to my cheeks and I turned away.
“I’m sorry about Gunnar,” she said. “I talked to him once and thought he was nice.”
“Yeah, he was,” I said. My voice sounded harder than I wanted. I glanced at her. A blush fell across her face. “I’m sorry I didn’t mean to snap at you. Don’t want to think about…You know.” I couldn’t say the word – let alone think about what his father did to him in that dungeon. I gripped the stone railing. God, if I could swoop in there to rescue him, I would, but Gregori, I mean, Dad said not yet. He and Montae worked on a plan. I hoped we weren’t too late.
Cadye squeezed my hand. I trembled at her soft hand on my skin.  I gritted my jaw as my pants tightened again.  This sucked.  God, what if she noticed?  I’d jump off the balcony and hide in one of the pine trees and hibernate with the squirrels.
As you can see Armond, is not sure what to do with Cadye and is worried about his body betraying him, which is something he struggles throughout the story.  His story is about self-discovery and resiliency.  Besides squirming in his pants over a pretty girl, his body goes through changes he doesn’t know how to handle such as sprouting wings on his fourteenth birthday and being scared on whether his friends would accept him.  His life is turned upside down when he finds out not only is he not human and a demon, but he’s the Healer for the Golden Demons.  If he doesn’t learn to trust his powers and accept his role, people and demons will die - hard choices to make when you’re only fourteen years old.
Here’s an excerpt from my book The Healer, which will be released on February 27th from Featherweight Press.  It’s the opening scene to Armond’s terrifying life with his Uncle Peter and Aunt Janet. 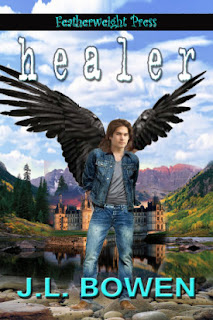 WOW!! Enjoyed hearing about your book. It sounds very good. Being a teen is so hard. (wouldn’t want to go through all of it again for anything) LOL Thanks for sharing.
fshasm@cableone.net