It’s amazing how many romance authors spent our younger years shrouded in shyness!  Some of the authors I’ve come to know and adore still are and then there are others like myself who have managed to tame the Shy Demon (for the most part) and love to get out and mix.  But shy for most of us put a cramp in our budding love life in our younger years.  Today Belinda McBride shares the adoring crushes of her youth by the shy young girl who lusted from a distance.  Yep, can so relate!


Enjoy Melinda’s story and the excerpt she shares from her latest book.  Be sure to leave a comment to enter your name into the drawing for a copy of the first ebook in the series.
The Magic Bus
When I think of first crushes, first loves and first kisses, one thing invariably comes to mind: The school bus. An odd image, yes, but for whatever reason, the antiquated yellow school bus was the setting for so many romantic flights of fancy. Since I lived rural, bus rides were long and boring and I learned to let my daydreams go, keeping myself entertained. It gave me a foundation for what would come years later, as I traveled a bi-weekly 300 mile round trip to my university, spinning tales in my mind to fill the time. Those stories eventually came out and were written, leading me to what I do now.
Reality was fascinating too. My first crush? Well, I don’t remember their names. I was very, very young…perhaps in the fifth grade. I know it must have been around that time because I wore glasses and could actually see the object of my obsession.
Did I say object? Make that plural. They were siblings. A brother and sister.
They were both everything I’d never be: tall, dark and exotic. The boy was thin and stunningly handsome with a quick, stinging wit. His sister was without the curves most eighth grade girls were developing; she wore clothing that looked cool and funky, and most likely came from the Salvation Army. She spoke little and though she was aloof, she was kind. They lived on our street for a year, moving after their house burned down. It didn’t seem odd at the time that I was crushing on a girl and her brother. Now I have to shake my head and laugh. But I spent many hours watching them in rapt fascination. They were so beautiful.
In my area, there was only one single school that housed ninth graders. It was a grand experiment, designed to transition kids from tiny schools like mine into high schools. I rode a bus for well over an hour to get home from school, and during that time, I’d gaze at . He was Native American and lived on a tiny compound the County had shoved the local Indians onto. His long black hair was wavy and had a burgundy hue. He was quiet, stiff in his seat, and seemingly had few friends. Many of the kids who lived on that compound vanished without finishing a full year of school. It wasn’t a reservation so there was no cohesive tribal structure for the kids to hang onto. It was a tough place for a kid to grow up; they were the poorest in our dirt-poor school district.   stayed throughout our four years in high school. He made the football and track teams and played all the way till graduation. He did well in school and I don’t recall him ever getting into major trouble. I like to think he got out and made it to a better future. In the four years we went to school together, we never talked. I was too shy.
In my sophomore year, it was Dave and Mike. I liked Mike, Dave liked me. Looking back, I rue my taste in boys. Dave was cute, sweet and really kind while his best friend Mike was an arrogant, aggressive baseball player. Given that he kept a bottle of tequila in his locker the entire time I knew him, it wasn’t strange to realize that he was washed up before graduation. Dave though…he went on to college and out of my life.
Other firsts on a bus? A kiss. A groping under a blanket. As a teen, a Greyhound trip to culminated in a harrowing encounter with a pimp who tried to lure me away from the station. As an adult, I took a tour bus trip to to watch U2 in concert. I connected with the man who’d be my first post-divorce boyfriend. A trip through the mountains with my two toddlers ended with us stranded in the snow in the Siskiyous.
A bus takes a child home but it also takes an adult to their future. So many hours are spent going back and forth, seeing people you see only in the short time you are traveling together. Brief connections are made and quickly severed. Next time you ride a bus, look around and see who’s there. Take a moment to wonder who they are and where they’re going. And imagine…
Belinda McBride lives with her family and a pack of Siberian Huskies in the shadow of . She writes erotic speculative fiction for several publishers. To find out more about her writing, please visit her webpage at http://www.belindamcbride.com or her blog at http://www.belindam.blogspot.com . 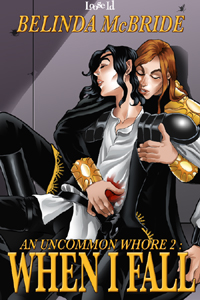 
As king, Helios Dayspring is desperate to secure the future of his people and their new homeworld. His lost memories are slowly returning, bringing with them danger and betrayal.
As the king’s consort, Griffin Hawke wrestles with growing isolation from his lover. When Helios’s secrets begin to come to light, Griffin finds that he barely recognizes him anymore. And Griffin is haunted by his own secrets, nightmares that bring torture and death in his sleep.
Surrounded by enemies and allies, seductive aliens and dangerous operatives, Helios and Griffin find themselves tested to their physical and moral limits. Not knowing who to trust, they can only turn to each other.
Will you be there to catch me when I fall?
Excerpt:
“No!”
I bolted upright in my bed, sweat pouring from my skin, my single eye wide in horror at the memory of the dream. I gasped, unable to breathe.
“Easy, Grif. You’re all right.” Arms surrounded me, strong and secure. Copper hair, looking like flowing ribbons of blood in the moonlight, spilled over me.
“Helios…” I groaned in bewilderment and laid my head to his chest. “Oh…Lio…” I reached up to stroke the beautiful lines of his face. Alive. Safe. I stared at him, reminding myself of the here and now. His heart beat strong and steady; his skin was warm with sleep. But still, the nightmare had been so horribly vivid.
He gently laid me back on the bed, his arms still wrapped around my body. I breathed then, gasping, surrounding myself with his warmth and fragrance.
The dream seemed real because it had truly happened. I remembered that day, watching the atrocities as the Landaun broadcast themselves to all ships and planets in neighboring systems. Markus Dayspring had stood next to me on the bridge of a rescue ship. He’d watched and, in horror and pain, collapsed to the floor at the wholesale slaughter of his family. All the while he’d been a traitor. He’d known what was to come. Had he been that good an actor, or had his treachery rebounded on him? His grief had been as agonizing and poignant as my own.
I also remembered the ritual execution. The blade flashed through the air and then came to rest on Helios’s bared neck. They’d spared him, chortling over his future as a whore and a slave. To the Landaun, surrender was a fate worse than death. Surviving defeat was to be forever shamed. The fate they’d planned for the warrior who’d fought them so valiantly was literally the worst they could dream of.
But Helios had survived and returned to us. He was here on our mysterious new world in a strange section of the system. He was alive and in my arms.
Did he remember that day? I’d asked before, and he’d always said he had no memory of his surrender. I believed him; his memories were patchy at best. The slave chip that had been implanted in his brain by Warlan slave traders had been deactivated, but Helios might never regain all his memories, even of that most horrific day of our lives. So of course, I believed him. There was no reason not to believe.

Thanks for sharing, Belinda :) After I started writing m/m, riding a buss is a whole new experience for me. No, I'm not lusting after the guys, but I watch them, take note of their movements, facial features, hair, and such. Buses are great for people-watching ^.^

Hi Erica, you're so right. I love to people watch too, and when I'm in the city, so many people travel by bus around town. I've even had dreams about meeting some of my characters on the bus!

I love watching people. Especially at events where people tend to imbibe a little too much. All their inhibitions come out or the complete opposite. It can be amusing. Never rode the bus that much. I would always talk my parents into taking us to school. LOL
The excerpt is great. I look forward to reading it. :)