Today, S.G. Rogers shares her first kiss(es) and how the magic of a first kiss can lead to more than friendship.  In addition we get a glimpse into her book, Minna and the Valentine and the chance to win a copy!!  So be sure to leave your email address when you leave your comment.
S.G. Rogers Kisses and Tells
My first kiss was when I was fifteen.  Neither of us knew what we were doing…his technique seemingly was to mash his teeth into mine as hard as possible.  Our relationship didn’t last. 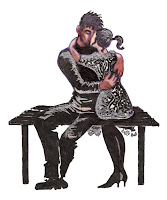 The best first kiss I ever had was in college.  A buddy and I went out to dinner over Christmas break. I’d had a recent and rocky split with his roommate.  Robert was always a gentleman and a wonderful listener.  I knew him to be a man of good character, and he always acted like I was the most beautiful woman he’d ever seen, even when my eyes were red and swollen from crying over the way his roommate had treated me.
Robert walked me to my door and leaned in for a kiss good night.  I had no romantic ideas about him at all.  A friend and a confidant, yes, but a boyfriend?  The kiss traveled from my lips to my toes and back again. It changed how I felt about Robert completely…and so I married him.
Happy Valentine’s Day.
Minna & The Valentine by S.G. Rogers 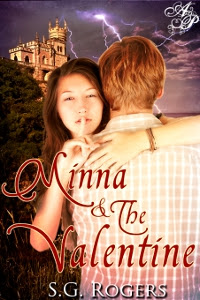 Minna has a secret.  Her father, ex-dragon jockey Wynn Westerfield, will forever hold a grudge against wizards.  Because it was a wizard who caused his career-ending accident, Minna struggles to hide her incredible magical powers from him...and from the world.
Evan Valentine has attended a prestigious magical academy on scholarship, although he's managed to conceal that fact from everyone. He's on the fast track to success with his apprenticeship to wizard Thaddeus Bartholomew, and Evan's carefully constructed life doesn't include a certain beautiful girl whose powers rival his own.
Although Minna and Evan don't realize it yet, their destinies have been intertwined for years. When a threat arises, Minna and Evan must travel to another reality to retrieve a dangerous magical artifact.  Can Minna and Evan learn to work together, despite their mutual mistrust? Or will their explosive romantic attraction lead to disaster?
Excerpt:
As he hung his coat on the closest hook within reach, she couldn’t help but admire Evan’s broad shoulders and slim hips. Her reflection in the window, on the other hand, reminded her that her long curly hair was twisted up in a sloppy topknot held in place by a pencil, and she wasn’t wearing any makeup. Her color rose.
“What brings you out in this storm?” she asked.
“Oh, um, I came to see Cardinal Hollow. It’s a charming town.”
“You picked a bad day for sightseeing.”
“As it turns out.”
The wizard’s blue eyes twinkled in her direction, and Minna gulped. She ladled the hot chocolate into mugs and emptied a small tin of cookies onto a plate, trying to steady the trembling of her hands. Evan reached for the tray.
“Here, let me get that.”
Minna led the way into the living room, where a blazing glow now lit the fireplace—without the benefit of fuel.
“A logless fire spell! The only time I’ve ever seen one done successfully was in Aldesbury.” She gave the wizard a delighted smile. “Nice one.”
“I’m glad you like it. The secret is to use a containment field.”
“But how do you—” She broke off, unwilling to ask too many revealing questions.
Minna curled up in a worn armchair, leaving the sofa to Evan. As the wizard sat facing the fire, the puppy stood on his hind legs and stretched his paws toward the man’s knees. Charmed, Evan chuckled and lifted the dog into his lap.
Lucky dog, Minna thought, sipping her hot chocolate.
Minna & The Valentine is available from Astraea Press, Amazon, BN.com and other fine outlets.
Astraea Press - http://www.astraeapress.com/#ecwid:category=662245&mode=product&product=9158189
Amazon - http://www.amazon.com/Minna-the-Valentine-ebook/dp/B0074118M2/ref=sr_1_1?s=digital-text&ie=UTF8&qid=1328098320&sr=1-1
BN.com - http://www.barnesandnoble.com/w/minna-the-valentine-sg-rogers/1108530678?ean=2940014107907&itm=1&usri=minna+%26+the+valentine
Posted by Lizzie at 6:12 AM

Your story about Robert made me smile. I am a sap for happy endings. So glad you got that magic kiss. I enjoyed the excerpt too.
fshasm@cableone.net

Your first kiss is always magical, I still remember mine! Thanks for the post and good luck with your book!

Oh, how sweet!!! Isn't it funny how things work out sometimes? Great story and I loved Minna and the Valentine!!!

Thanks for having me on your blog, Lizzie! I'm glad people like my story. I had to get permission from Robert to write it!

Awww, Suzanne! Love the happily-ever-after of you & Robert!! (and I'm loving MINNA & THE VALENTINE!!)

What a great first kiss story! How long have you and Robert been together?

Oh, I love stories like yours, Suzanne. Thank you for sharing.

Love your first kiss story! That is wonderful! The books sound great!

Your story about Robert sounds amazingly like how things happened with my hubby! Guess that old song was right - "It's in His Kiss." Happy Valentine's Day!

Awwww - twinkling toes! ;-D Good story, Suz. Love the mashing too, and I remember "where does the nose go--oh! ouch." Happy days with Robert - he sounds like a prize.