Sandra Sookoo is one prolific writer!  Every time I look up, the gal has a new release and that is one of the reasons, in addition to envying her ability, I adore her!  Her cheerful post on Facebook and Twitter that greet me each morning bring a smile to start a long day.  And another connection we have…we both were introverts in our younger lives!  Welcome, Sandra!

Prize for a random commenter on this post:  book swag plus an envelope of Valentines-themed prizes.  Please be sure to leave your contact info.
First Kiss
Thanks for having me on your blog today.  Hmm, I could talk about my first crush, which was the director of the Indianapolis Symphonic Orchestra back when I was in high school, or I could talk about my second crush, which was on the assistant band director of the marching band I was in, also during high school.
Yeah, I had a thing for musical guys apparently LOL
I’d rather talk about my first kiss with my husband.  I didn’t do a whole lot of dating in high school or even during my twenties.  A combination of being an introvert, lack of decent guys in the area and a stranger than fiction home life seemed to be the perfect storm of keeping me out of the dating pool.
Incidentally, my hubby and I have been married for almost ten years (anniversary in December), but I’d corresponded with him and talked on the phone to him for three years prior to us first meeting.  Yes, we were pen pals or Internet friends long before it was “acceptable”.
I won’t bore you with the long, drawn out story.  Suffice it to say, when we first met, it was in his country.  He and several family members/friends picked me up at the airport.  My husband and I held hands in the car.  There was an immediate connection and a sense of finally meeting an old friend.  By the time we arrived at his aunt’s house, we just wanted to be alone LOL
The magical moment came soon, and he took me into his arms… and we bumped noses.  Yeah, we couldn’t figure out the logistics of lip placement.  I guess when you put two people who’ve never dated that much together, it’s bound to happen.  The next attempt went better, of course, but it was still a tad awkward.  These things take time to perfect!
Almost ten years later, I still get all tingly.  I’d say practice makes perfect.
I thought for fun, I’d share a blurb and excerpt from a romantic comedy I wrote called Wedgie Tales and Panty Lines.  This is Kate’s first kiss with her man Bryan: 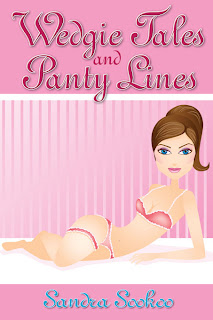 All Romance ebooks--
http://www.allromanceebooks.com/product-wedgietalesandpantylines-449691-149.html
And remember, you can always look me up in the following places:
Website:  http://www.sandrasookoo.com
Believing is Seeing blog:  http://sandrasookoo.wordpress.com/
Twitter:  http://twitter.com/sandrasookoo
Facebook:  http://www.facebook.com/sandra.sookoo
Posted by Lizzie at 5:15 AM

Thanks for hosting me today!

Love this! So glad practice made perfect. Waving to Lizzie and Sandra!

Love your life story, and the book sounds great!

Great stories!!! Thanks for sharing!!

Hi Connie! Thanks :-) The tale's much longer than I had time for today LOL

Hi Stephanie! You're right. There's a sequel on the horizon just as soon as I clear some stuff already on my plate :-)

Ahhh... That's a sweet story. I think it is appropriate for me to tell you that my first kiss was actually on the Mark Twain boat at WDW with a guy I met at the park :)

Love this too! My first kiss was in first grade with Billy, but my marriage is a love story in itself since I remarried my ex-husband after 15 yrs. We got back together on Facebook and he moved back here from Cleveland withing 6 weeks! We re-married on the same date we had married the first time and now it is going on 2 years and we are still in love and very happy!

What a nice story Lisa!

Great story!! Your book sounds awesome! Thanks so much for sharing!
-Amber
goodblinknpark@yahoo.com

The randomly chosen winner is Lisa Fender. If you can email me at sandra (dot) sookoo (at) comcast (dot) net, I'll get your prize out!

Thanks for coming out everyone!