Today Lynn Crain shares her first real kisses and the ones she creates in her stories.  Join Lynn for a delightful read on how she creates that all important first kiss between the characters through the samples she includes here. 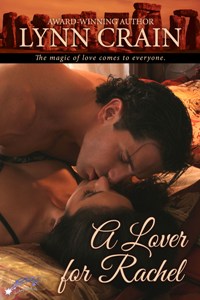 Lynn’s latest book is, A Lover for Rachel, an erotic paranormal romance set at the romantic setting of Stonehenge. It’s available at Amazon and Smashwords.
Rachel Hamilton comes to Stonehenge to celebrate her birthday on Summer Solstice, only to find herself trapped beneath the massive rhyolite bluestones with sexy wizard, Dewin Kingston, who convinces her that she is the key to their escape.
Excerpt: Dewin frowned and looked over her shoulder toward the fairy now sitting on a high shelf. “Nora, did you sprinkle Rachel?”
She turned, watching the small light bob up and down in the farthest corner of the chamber. “I guess she did then. So what does being sprinkled with fairy dust do?”
“This.”
His mouth swooped down to kiss her deeply. His kiss was extraordinary as he tugged on her lower lip with gentle nibbles. She leaned into him and snaked her tongue into his mouth, trying to elicit a response from him. She was rewarded with his tongue coming together with hers to war for supremacy. Deliberately, she pulled herself from the ever-enticing ritual.
Rachel gulped in a few deep breathes, her hand holding him at bay. “Okay…we’ve established that fairy dust heightens one’s sexual response. Is that all it does?”
He pulled up from kissing her neck, his large hand caressed her face. “No, the dust has a lot of magical properties. We will have to complete what we start. I hope you do not mind…it has been a long time for me. The fairy dust makes our lust palpable, like a living thing until the need is fulfilled we can do little else. Not doing so will only lead to torment everlasting.”
PRIZE to be given away: A copy of the ebook, A Lover for Rachel, one ebook from the Santa’s Elves series and a $10 gift certificate from either Amazon or ARe.

You got my attention LOL!!! I have a feeling I am going to be thinking about kissing all day. A LOVER FOR RACHEL sounds awesome. A sexy wizards and fairy dust is right up my ally. Paranormal romance is my favorite to read. Thanks for sharing Lynn.
fshasm@cableone.net

Thanks, Shonna, for stopping by! I am so glad you liked the blog on kissing. I love elves and fairies and wizards.

And I'm very happy to have entertained you!

Glad you could stop by Connie!