Twelve years ago I married a man who has enriched my life in so many ways. We wanted to make this marriage special and decided to follow one of our ancestral lines and get married in Scotland. After numerous web searches and emails back and forth with the wedding coordinator, we chose Borthwick Castle as our destination. 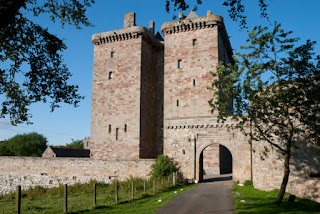 The history of the castle is one of the reason we selected Borthwick, outside Edinburgh . Mary Queen of Scots spent time there after her marriage to Earl of Bothwell. When the British army arrived to capture the Earl for the murder of Mary's prior husband, he escaped to go raise and army of his own. When the Brits came for Mary she escaped through a window dressed as a page.

Memories were created for us here, including being late for our wedding. The countryside offered opportunity to explore an old church can cemetery which led to losing track of time. Fortunately, we were only a few minutes late and I couldn't believe I was following a Piper up the winding narrow stone steps to the chapel on the top floor to say "I do." Those two little words have become some of the best ones I've spoken.

So thank you My Honey. Our years together brought the missing piece we both had in our lives together. Yes, I'm not only happy but content, along with feeling blessed. And yes, you look great in a kilt.

Happy Anniversary, Honey!
Posted by Lizzie at 8:05 AM