Join me in welcoming Franny Armstrong today.  I met Franny at RT in Los Angeles and spent a bit of time hanging out with her in the vendor room.  She was promoting a model service and had lots of hot guys hanging out there too.  Her great sense of humor and up-beat attitude (an of course the guys) had me wanting to learn more about her.  I discovered in addition to pomotions, she also writes.  Today she is sharing a snippeted of her latest release Intruder Alert with us.  So grab a cup of coffee and relax while you get some interesting questions put to you.  Also, you're going to love Franny's recipe...yummmmy!

Bake in preheated oven for 1 hour 15 minutes or until tooth pick comes out clean. Cool then refrigerate for up to 4 hours. Decorate with remaining whipped cream.


Do you believe what you cannot see?
When faced with the unexplained, what is the first thing you do?
Lee Everette, Private Investigator doesn’t turn and run but faces whatever comes at him. The paranormal is nothing new to him because he’s a psychic with an ability he calls a curse. Spirits inhabit his mind, using his body against his will.
When the beautiful Sage Winters is assigned to train him so he can control the spirits, he awakes on a Caribbean island in her naked arms, married to her. Confusion, frustration, and danger abound as Lee struggles to survive an learns that love is another affliction he cannot beat.
His business partners, Jordi Hazzard, and Piper Preston, are nowhere in sight, leaving Lee and Sage to battle VooDoo and evil together, or die. 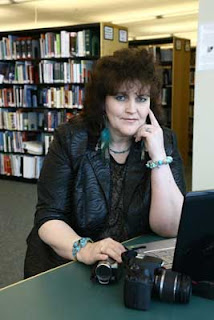 Franny Armstrong is a multi-published author of 8 books with more to come. ‘Intruder Alert!’ is the second book in the series ‘7th Eye Private Investigations. For book 1, ‘The Mystic Touch’, where you’ll meet Jordi and Piper, check out www.RedRosePublishing.com under the author tab for Franny Armstrong. The Paranormal keeps you guessing.
Also, Franny is President of Author Promotion Services, a site that helps authors with their promotions and sales.
Franny Armstrong
www.ParaNovelGirl.com
www.RedRosePublishing.com
www.AuthorPromotionServices.com
‘An Author’s Best Friend!’ 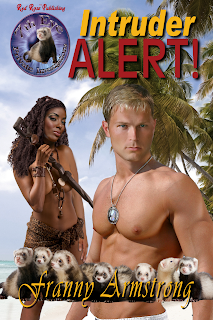 7th Eye Private Investigations Book 2-Intruder Alert!
“Damballah–Wedo Resort, Haiti? Holy crap!”
“Good morning, sweetheart.” Her husky voice had him turning before he could think, his hard rod standing straight and pointing right at her. Before he could cover himself, she left the doorway and closed the distance between them until her breasts were pressed up against his chest.
Lee gasped, trying to pull away but she tugged his hair until his head lowered enough for her to capture his mouth with a heated kiss.
“I hope you’re feeling up to leaving the room. I’m starving after last night. You are one energetic man.”
Her sexy laugh, instead of exciting him, infuriated him when he thought of an inhabiting spirit having her with his body. Cheeks flushing with heat, he grasped her wrists and gently pushed her back then left the bathroom. Frantic, he searched for something to wear. I have to get out of here. I need to think!
“What’s wrong, sweetheart?” Sage frowned, her expression full of hurt.
“I want to get some air.” Nearly desperate to get out of the room, he threw on some shorts and opened the front door. That he was stunned by what he saw would be an understatement. He felt like he’d entered Alice In Wonderland’s adventure.
What he’d thought was a screeching ceiling fan turned out to be a symphony of creatures all singing together in the lush tropical forest before him. The air smelled salty and fresh and he heard the sound of waves crashing to shore somewhere close.
Soft fingers touched his bare back, making him shudder with need. He turned to face her, wondering what to say.
“Talk to me, Lee. I don’t know what’s bothering you, but I’m sure we can talk it out. Didn’t you…” She looked away for a moment, her eyes filling with tears. “I thought last night was as good for you as it was for me.”
How could he tell her that he had no recollection of anything past the moment she left his room in the lab to go to her boss’s office?
“This might sound crazy, but tell me how we got here.”
Her eyes widened in dismay. “You don’t recall asking me to run away with you to Haiti?”
Between his forefinger and thumb, he pinched the bridge of his nose. With a shake of his head, he groaned in dismay. A deep sense of regret that he was hurting her filled him and shame weighed heavily on his shoulders.
“Are you telling me that you don’t remember anything?”
“Sage…”
“Well, at least you recall my name,” she snapped, turning to rush back into the room.
As he stood on the porch looking at the gaping doorway, Lee was lost. He’d hurt her without meaning to, was lost in space, and had no idea how to rectify the situation. Great start to a day.
He ran his fingers through his hair but winced when something caught and pulled. When he looked down at his hand, he saw a wedding band on his ring finger and his jaw dropped. Shock overwhelmed him as he headed back into the room. Sage lay on the bed, her hands covering her eyes. There, on her ring finger was a diamond ring and matching wedding band.
They were married!
“Holy shit!” he cried. “What have we done?”
In a quick move, Sage’s hands came away from her face, revealing her pain.
“That’s it? Not twenty four hours of wedded bliss and you’re done with me? You bastard!” She rolled off the bed to her feet and tried to push past him, but he pulled her close, locking her in a tight embrace.
When she dropped her forehead on his chest and sobbed, he felt like a heel. Still, her soft body pressed against his and her heady scent made his groin ache with need at the same time he felt like a big heel. Gently, he lifted her chin with his fingers to stare down into her soft brown eyes.
“Sage, I don’t know what’s happened, but I hope you won’t take this so personally. I haven’t got a clue how we got here. Please, give me a bit of time to figure this out.”
Trembling lips beaconed to him. The anguish in her eyes hurt him deeply. He lowered his head and captured her mouth with his, sinking deep into her as the warmth of her gift flowed over him. His tongue slipped past her parted teeth and delved inside her mouth, seeking and finding its welcome mate.
Lee and Sage moved closer yet, merging spirits, blending souls until they could barely breathe for the pace of their hearts.
Lost, he was lost in her. As he lifted his head, he stared down into her eyes and sighed in defeat.
“I’m sorry, Sage. I wish I had answers for you…for us both.”
“You said you loved me,” she sobbed softly, tears falling down her soft cheeks.
Though he brushed them away more followed suit until they created a river. Guilt rushed through him. “I…” He couldn’t answer. Confusion became so strong he didn’t know what to say so he let her go, walked back into the bathroom and closed the door, locking it. He needed a long, cold shower. His cock was nearly bursting with the need to sink inside her sheath and claim her as his.
The minute he turned on the cold water and climbed beneath the spray, he hissed as the shock of it hit his body. Lee cursed when he realized that even cold water couldn’t hold back his need for her. He only wished he could remember their first time together.
“You bastard, get the hell out of my body. You can’t have her, she’s mine!
Echoes of laughter within were his only replies.
Posted by Lizzie at 4:31 AM