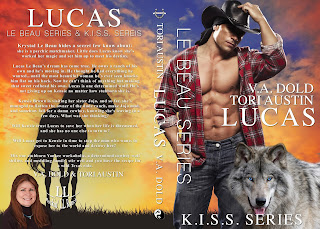 Krystal Le Beau hides a secret few know about: she is a psychic matchmaker. Little does Lucas know she’s worked her magic and set him up to meet his destiny.


Lucas Le Beau’s dream has come true. He owns a ranch of his own and he’s moving in. He thought he had everything he wanted...until the most beautiful woman he’s ever seen knocks him flat on his back. Now he can't think of anything but making that sweet redhead his own. Lucas is one determined wolf! He's not giving up on Kensie no matter how stubborn she is.


Kensie Brown is visiting her sister Jojo, and so far, she's managed to flatten the owner of the dude ranch, make Jojo mad, and somehow fall for a damn cowboy, knowing she's leaving in a few days. What was she thinking?


Will Kensie trust Lucas to save her when her life is threatened, and she has no one else to turn to?


Will Lucas get to Kensie in time to stop the man who wants to expose her to the world and destroy her?


Mix one stubborn Yankee workaholic, a determined cowboy wolf shifter, and meddling family, stir well and you have the recipe for a wild Texas ride.
EXCERPT:
Posted by Lizzie at 8:59 AM

Thank you for hosting me today Lizzie! Love you girl.

Delighted you could guest! Love you back, lady!