In the spotlight this week is Lori Consentino’s new release Destiny’s Awakening.  Check out Lori’s venture into the world of the Fey.   Have added it to my TBB list!

Lori’s love of reading has transcended to include penning her own tales of romance. She is experimenting with writing in several different genres, including paranormal – a definite favorite. “There is just so much you can do when you step outside the known world,” she explains “and creating a paranormal story allows you to take yourself and your readers anywhere your imagination wants to go!”
Destiny's Awakening is Lori's first foray into the "Tales of the Fey" paranormal romance trilogy. Visit her website at www.loricorsentino.com and follow her on Twitter @LoriCorsentino and on Facebook.com/LoriCorsentino. Also check out her blog weekly for a Manic Monday, Wicked Writer Wednesday, or Favorite Friday entry. 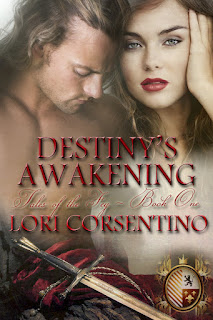 BLURB:  Men of the present weren’t able to hold archaeologist Evelyn Wright’s interest for long. Her passion lay with discovering the lives, loves, and legacies of men in the past.


Five hundred-year-old Prince Alexander slumbers alone in an enchanted sleep.  Imprisoned by ancient Fey magic to stave off a civil war, he awaits the woman who is destined to awaken him.


Thrown together by an unseen force the career-minded modern woman and the aristocratic Fey Prince share a magical kiss that sparks more than mere romance.


Together they will create a key to open their hearts to a true love that will thwart the plans of an evil Wizard and save their worlds.


EXCERPT:
“What were you doing when I first arrived here?” Evie again motioned to the podium. “The talking head said you were in ‘The Greatest Sleep’ or something?”
“Yes. In my language, it is called the Ka’al’inar. The Great Sleep.”
“When did this happen?"
“It was during the tenth phase of the Dragontides.”
He said it matter-of-fact. Did he think everyone in the world knew what a Dragon-tide was?
“Oh, really?” Shrillness crept back in and leant a sharp edge to Evie’s voice “The tenth phase you say?” At his nod she continued, “Oh, Okay. It makes sense now.”
“How is it you know of our phases when you know nothing of my world?” Skepticism colored his words and lent them a harshness she’d not yet heard.
“Do you have sarcasm in this magical world of yours?”
“Yes.” His eyes narrowed, showing his displeasure. “We also have rudeness.”
Fire returned to her cheeks with a molten rush. She was once again ashamed of her behavior. She was making a habit of this.
“I’m sorry.” She broke eye contact and looked down as she apologized. She didn’t know where this inexcusable need to be such a bitch was coming from. “That was rude of me.”
“Yes, it was.” She looked back up. He inclined his head, gracious as ever. “I see no reason to admonish you. Apology accepted.”
Evie really felt like shit now. He was so noble, so majestic. No wonder he was a Prince.
“Why would you do such a thing to yourself?”
“What? The Ka’al’inar?”
“Yes. The Call-in-ar.” She angled her head to the side. “Is that how you say it?”
“Yes.” He approved. “You have very good pronunciation.” The dimple peeked at her. “You say it almost better than me.”
“Gee, thanks.” Evie wasn’t buying it, yet. “Why?”
“To save my people.”
He was direct with his answer. Evie bet he probably hadn’t thought twice about subjecting himself to this greatest sleep thing. He’d just gone ahead done it. To him, it was the only thing to do.
“They, your people, are pretty important to you, aren’t they?” Evie couldn’t help the bit of awe which crept in to her voice.
“It is my duty to protect them,” he answered. “I am the Ruling Prince of Sha’Mir. My life is devoted to my people.”
“Did going in to the sleep hurt?”
“Yes,” he answered. “But not nearly as much as the tortures I endured at the behest of Claudius.”
Evie smothered a giggle. Did he really just say behest? No one said behest. She bit the inside of her lip and endured her humor. He looked at her and raised a questioning eyebrow.
Evie fought to keep to the thread of conversation. He probably wouldn’t understand her laughing at his use of the old language. It was actually quite charming. Saying things like behest and admonish were charming the pants off her.
Literally.

Great excerpt and beautiful cover! :) Wishing you many sales.

Loved your excerpt, sounds intreguing! I will have to read your book! Good luck with sales, I wish you many successes!

Thank you so much, Destiny! I'm so pleased with the cover art. It captures perfectly both my hero and heroine. Love your name, by the way!
Lori

Thanks Lisa! I'm glad you enjoyed the excerpt and hope you enjoy reading the entire novel! Thank you for your good wishes. : )

And the winner is...Destiny Blaine! Thanks so much for your comment, Destiny. Email me at lacorsentino@msn.com to claim your prize! : )