The amazing Lori Wilde shares a bit of insight into how a scene in her upcoming release of The Cowboy Takes a Bride came to be.  It's alway fun to read how other authors incorporate tidbits from real life into their work.  So think you for sharing Lori and thank you for a terrific post!  Look foward to your new release.
Also, Lori's drawing of a winner from comments left here is a $10 gift card to Amazon...Can I enter Lori?

TRUTH IN FICTION
By Lori Wilde
Usually, when I plot a book, I go do research, but once in awhile, something happens in my life that leads to a plot point in the story. That’s the case with THE COWBOY TAKES A BRIDE, due to hit store shelves on March 27th. It’s the first book in my new Jubilee, Texas series about cutting horse cowboys.
Let me set the scene.
It was a nice fall evening in North Central Texas. My husband and I had been out and about for the day. We were gone longer than planned and we’d neglected to leave the porch light on. I was wearing a pair of flip-flops, because in October in this part of the county the temperatures can range anywhere from 30 to 80 degrees. The day had started out warm, but it had turned cold with nightfall.
As my husband was parking the Jeep (he likes to back into the garage), I hurried toward the back door in the dark.  I reached for the doorknob and at the same moment felt a stinging pain in my ankle. Stunned, I looked down to see a snake sitting up, swaying back and forth behind me.
My freak-out-o-meter hit panic. I threw open the door and stumbled inside, my heart racing. I turned to shut the door behind me, but the snake was coming after me!
I slammed the door on him. He wavered back and forth, half of him in, half of him out my kitchen, his tongue flicking wildly. My mind was racing. I’d been snakebite! Simultaneously screeching to my husband that a snake had bitten me, I examined the creature. He looked like a rattlesnake. Diamond shaped head. Check. Dirty brown coloring. Check.
And phew! Did he stink to high heaven.  An odious cross between old copper, stale blood and stagnant mud.
Terror was ripping through me as I thought of the snakebite victims I’d taken care of when I was a nurse--skin gone necrotic and rotted out. Scar tissue. Painful skin grafts. Eeeps!
While the snake was still trapped in the slammed door looking particularly perturbed, I glanced back down at my heel. Blood trickled over my flip-flop.
This is it, I thought. A rattlesnake got me and I don’t have health insurance.
“Calm down,” my husband—always the rational one—called through the door.  “Are you sure it’s a rattlesnake?”
I realized I hadn’t heard the snake rattle. Then I realized something else. While the wound stung, it didn’t hurt that badly. I remembered hearing patients say that being bitten by a rattlesnake was like getting hit with a sledgehammer. I took another look at the wound and saw a ring of perfect tiny teeth marks encircling my ankle. Um, rattlesnakes struck with fangs, not teeth, right? Relief poured over me.
By this time, my big strong hero had opened the door and dispatched with the snake. Hubby tended my wound and then we got out his reptile book and discovered I’d had a run in with a harmless rat snake. They’re very aggressive and when they bite, they emit a foul odor.
I have to admit I was a little sheepish for the freak out, but my mind was already churning and I just knew I had to use the incident in the book.
They say everything is grist for the writer’s mill. In this case, I know it’s true. So when you read the snakebite scene in THE COWBOY TAKES A BRIDE, do know that sometimes truth and fiction can be the same thing.
Friend Lori on Facebook http://www.facebook.com/lori.wilde
and follow her on Twitter 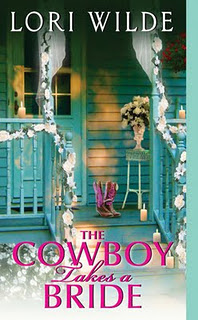 Ex-champion bull rider turned cutting horse cowboy Joe Daniels isn’t quite sure how he ended up sleeping in a horse trough wearing nothing but this Stetson and cowboy boots. But now he’s wide-awake and a citified woman is glaring down at him. His goal? Get rid of her ASAP. The obstacle? Fighting the attraction he feels towards the blond-haired filly with the big, vulnerable eyes.
When out-of-work wedding planning Mariah Callahan learns that her estranged father has left her a rundown ranch in Jubilee, she has no choice but to accept it. Her goal? Redeem her career by planning local weddings. The obstacle? One emotionally wounded, hard-living cowboy who stirs her guilt, her heartstrings, and her long-buried cowgirl roots…
Read an excerpt:  http://www.loriwilde.com/the_cowboy_takes_a_bride.html
Posted by Lizzie at 6:38 AM

It is a great book. I love the cover. Can't wait for everyone to have a chance to read it.

OMG, Lori! My worst nightmare happened to you. I live near the bayou's in Louisiana, and I always fear I will come across at rattle snake or one of it's deadly kind. Thank God it was a rat snake instead.

Your book sounds like a lot of fun, and I'm adding it to my TBP list now. Thanks for sharing your scary story.

Eeek! I'd have freaked out too. Good grief! Here in Illinois the worst we have to worry about (in most of the state at any rate) are spiders and the occasional rabid bat! I don't know if I could take living in a state with snakes and spiders and scorpions. {{{shudder}}}

I can't wait to read Lori's new book. Hers are always can't-miss-reads for me and I still remember discovering her for the first time with her Bachelors of Bear Creek series. I'm sure The Cowboy Takes A Bride will bring all her best elements - fun, sexy, heart-tugging, and hopeful romance - together again. :)

I can't wait to read this. I LOVE the cover.
Cathy
cathyann40 at yahoo dot com

sounds like a great book. The whole snake thing is my worst nightmare. I have a real thing about snakes. Prety much my philosophy is if they leave me alone i leave them alone but if they invade my turf they will be meeting a shovel up close and personal

I'm so glad it wasn't a rattlesnake bite!! I absolutely love your books and I can't wait to read this one!!

I am afraid of just about anything that crawls or slithers, so I probably would have peed my pants.lol. Anyway, I will definitely pick this up. I love all of your books that I have had the pleasure of reading.

I can't tell you how many close calls I've had with rattlesnakes. I hate them and believe that the only good rattlesnake is a dead rattlesnake.

I keep checking back to see if a winner has been picked. I'm patiently waiting for release day. I hope Walmart will have it.
Cathy
carhyann40@yahoo.com

Cathyann, Lori will connect with you. Thanks for leaving your email!