Our guest today is the delightful Christina James, author of erotic romance and romantic suspense novels.  A very talented who loves to push the envelope with her contemporary erotic romances with her alpha males and strong heroines, Christina’s books are a read that plays with your emotions.  She pushes you from needing ice water, to laughter and to ….aaah in situations that are hot, funny and touching.
Being mom to two children (their middle names is how she derived her pen name) and a couple of yellow labs who think they are lap dogs, she has a busy life before writing is added to the mix.
So let’s ask Christina questions and probe into her ‘dark’ secrets with our comments (like she has any), or at least find out what she’s planning for us in her next release.  And all today’s commenters will be entered into a drawing for a PDF copy of her romantic suspense Web of Lies and is also entered into the “Brit” trinket drawing I’ll be doing…prize to be picked up in England over the Christmas holidays.
The multi-published Christina is sharing one of her favorite recipes with us today.  One that may bring back memories for you too…I know it did me, of the enticing aroma of cinnamon wafting through the kitchen Snicerdoodles are pulled out of the over.
Snickerdoodles

1 ½ cups sugar
2 eggs
½ cup margarine (softened)
½ cup shortening
Cream all of the above together
2 ¾ cups flour
2 tsp. cream of tartar
1 tsp. baking soda
mix all of these with the above ingredients
Chill dough
After chilling, make dough into balls and roll in a mixture of sugar and cinnamon.
Place on ungreased cookie sheet.
Bake at 400 degrees for exactly 10 minutes.
For the Love of a Woman by Christina James 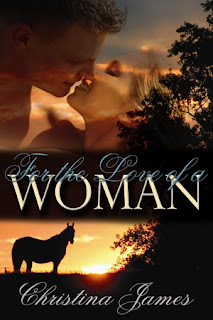 happy holidays, thanks for sharing.

Enjoyed the excerpt, sounds like a great book.
Merry Christmas and Happy Holidays.

Thank you for sharing a great excerpt! LOVE that you have labs! We had a yellow lab but now have a black lab mix and a yellow lab (mix, we think) puppy! BEST DOGS EVER!!!

Christina tried to leave messages but she's not on Google so her posts kept getting rejected. Been there with that problem even being on google so understand.

Anyway, her winner is j.barret. Congratulations, Jule! Email me at lizzietleaf(at)comcast(dot)net and I'll get you on the Brit trinket round winner list and get your info to Christina for her prize too.