Our guest today is the ever bouncing Rebecca Grace.  I did a book signing Friday night with this energetic lady and another author friend and it was a night of laughter, brainstorming and talking with readers…what fun!  Today Rebecca is sharing Christmas memories with us and a recipe she makes year round, holidays included. 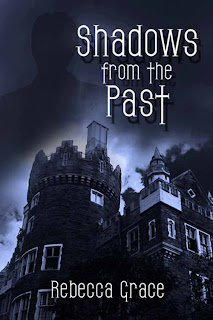 When Stacey Moreno goes undercover on Evergreen Island, she's looking for answers to a friend's mysterious death, not trouble. Stacey's not adventurous—she lives vicariously through her cartoon creation and can't tell left from right. But from the moment she moves into spooky Redfern Manor and meets her sexy new boss, sparks fly. Hobbled by injuries, former journalist Mack Warren came to Redfern Manor looking for escape, not romance. He’s interested only in writing the story of a former occupant of the manor and prefers to ignore the strange feelings his lively new assistant inspires. As Stacey digs for answers, she’s drawn to her mysterious boss, but he’s obsessed with a ghost. As danger draws near, can Stacey persuade Mack to face the shadows from the past that threaten to destroy their future?
http://rebeccagrace.com/

Rebecca, I had to laugh at your tale of the 1982 blizzard! My mother in law flew in that day and did the same as you, caught a ride with someone in their 4wd. She made it to our house and actually made it back to the airport the same day and was one of 3 flights that got out! Talk about luck! Anyway, I really like your blurb on your new book! Sounds like a great read! I hope you are very successful in your writing!

happy holidays. the food challenges sound too good. something we do here in town: have a mans bakeoff where the men fix all the desserts for the feast and they are judged by other relatives. it's hilarious to say the least.
thanks for having this contest.
Julie

I had to laugh at your recall of the Blizzard as well. Those were a tough few days to get around. We also celebrate the holidays when we can. One year we celebrated Christmas in February because my brother was in Iraq, the funny part was the day before "our Christmas" my moms pipes broke and she needed a plumber,so picture this plumber coming over in February to see a Christmas tree and house all decked out still. It was amusing to us to see his reaction. Love the Blurb on your new book, can't wait till it comes out.

I remember that blizzard. It worked out as my kids had chicken pox. So no one really wanted to come anyway.
debby236 at gmail dot com

That sounds like quite the adventure, luckily haven't had to deal with a blizzard and getting to and from family gatherings. Copied off the recipe, it sounds really good.

Lisa
Thanks for the comment. That was lucky for your mother to get out. Those were a few crazy days! We all just sat in the house, talk about cabin fever!

Julie
Thanks for the comment. I like the idea of a man's bakeoff. In our family, unfortunately, the men are all the better bakers!

Connie
Thanks for the comment. We've celebrated as early as Thanksgiving and as late as mid-January, but never February!

Debby
Thanks for the comment. It sounds like you really had your hands full on top of the snowstorm!

Jean
Thanks for the comment. I hope you enjoy the chili!

Becky, I can relate to the working on Christmas memory. My dad worked for the post office, and although there was no delivery on Christmas, there was mail to sort and double time to be earned. We often worked our gift exchange and holiday meal around his schedule.

Our Colorado snow tale is not as dramatic as yours except that ours included a new granddaughter. Zoe was born 3 years ago January 2 in Pueblo. In our zeal to meet her as soon as possible, we drove our 40-foot motorhome from Florida. It started snowing on us somewhere in New Mexico and kept it up until we turned off I-25 toward the marina where we camped. We couldn't get our car off the tow dolly until the next day because the tie down straps were frozen solid and the car was covered with black ice. Not the smartest thing we ever did, but totally worth it.

Thanks for your memories, and best of luck with your new book.

what a great tradition :)

Yum, I'll try this chili...
Christmas is just my favorite time of year...Family, Friends and TIME OFF WORK..lol
Merry Christmas Everyone

Linda
What a great story! It's always an adventure to travel in winter in Colorado.
Becky

Our tradition gets a new victim this year as our sister in law partakes for the first time. Hope she's hungry!

I feel so boring...no Christmas stories to tell that I can think of.
Thank you for the giveaway!

Becky is the best...her words heat up a cold winter night, and her chili sounds pretty smokin' too!

Your book sounds so intriguing! Its definitely drawing me in. ;) The chili sounds pretty good. Ill have to try this! Thanks!
shadowluvs2read(at)gmail(dot)com

Thank you, Rebecca. Always love having you guest with us.

And the winner is:

Connie, you are one lucky lady!!!! Congrats again!