And fun was had by all, or at least it appeared that way from what I saw. For some maybe a little too much fun (me, me!). Yes, I confess to late hours and early mornings at the RomCon Conference. I’m going to blame my roommates for the late hours since they’re the ones who drug their butts in after midnight Saturday (as in Sunday morning) and wanted to finish off the open bottles of wine. Yes, I joined in consuming a little of the grapes and laughed so hard at times tears flowed. Apologies to anyone who had the misfortune of being in the rooms on either side of us if we disturbed your slumber.

I met some really great people. The readers at this conference are delightful and you have the opportunity to really visit. A big shout out to the book clubs I had the opportunity to hang out with. Look forward to connecting with you soon.

Met some new authors and reconnected with several old friends. It was great to hang out during Saturday’s schedule breaks with Lynda Hilburn and Jeanne Stein. Had fun visiting with Melissa Mayhue Friday night before we both reached the ‘need to turn in’ moment and yesterday, rode over to an after conference book signing with Melissa, so yet more yakking. 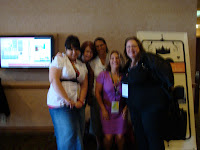 Told you I partied too much! From left to right: Hillary Seidl, me, Tiffany James, Mary Guida and Lori Corsentino.

All in all, a VERY good weekend!! But now back to the real world and a drop-dead, deadline. If my editor doesn’t have this book in her hands by next week I’m on her hit list. So don’t look for a lot of my smiling face on the social sites. Retreating into the cave!