Victoria Blisse is delightful! I’ve come to know her through Facebook posts and emails and love her sense of humour as well as her talent. She graciously consented to share her thoughts and snippets of her work with us here today. Join me in welcoming Victoria!

Also, one lucky commentor will will a copy of Moon Shy so make sure to at least say "Hi" to this fabulous author. So, here's Victoria! 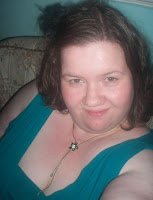 Victoria Blisse is a mother, wife, Christian, Manchester United fan and erotica writer. She is equally at home behind a laptop or a cooker and she loves to create stories, poems, cakes and biscuits that make people happy.

She was born near Manchester, England and her northern English quirkiness shows through in all of her stories. Passion, love and laughter fill her works, just as they fill her busy life


I do hope MC Hammer will forgive me for messing with the perfection of his song title, but I just couldn’t resist. Hello, I’m Victoria Blisse and I’m here on Lizzie’s blog (Thanks for having me) to talk about vampires. Hot, sexy vampires which are my favourite kind.

Last year I wrote a werewolf story (Moon Shy, you can win a copy of it for commenting on this post) and that opened up the possibilities of writing paranormal stories to me. Before that I’d kept to contemporary settings and so it was quite a challenge to write a werewolf but it was fun.
So next, I worked on a vampire. I got the original inspiration crossing the Yorkshire moors to Whitby and then I wrote The Point. Where Hugh, a Vampire of a hundred years or more meets Elizabeth, a doctor on holiday who falls and twists her ankle in a field behind Hugh’s home. He comes to her rescue and things lead on from there.

Hugh has established a club for vampires and humans to meet in, called The Point. It’s a place where vampires can meet humans. Hugh discovered that human blood after orgasm is more satisfying to a vampire. So if a person orgasms, just ten seconds of their blood is enough to satisfy a vampire’s blood lust. At The Point vampires pay humans to have sex with them and then allow them to suck their blood. It is the most civilised way for them to satisfy their needs without killing.

The second book in my Point Vamp series came out on Monday. It’s called Stopping Point and revolves around Hugh’s vampire club. Josh is attacked one night by what he imagines is a defenceless, curvy beauty who actually is a vampire. He ends up craving blood and not food and he just can’t understand why. Until he attacks a man and kills him by sucking his blood.

He finds Cara, his Sire and starts to find things out about vampires and as they say a little knowledge is a terrible thing and it goes straight to Josh’s head. He decides to turn his best friends so they can live in eternal friendship together. The plan does not go quite right when the girls Jos lures back to his flat know all about vampires and the ten second rule, which up until that point Josh knew nothing about. His friends insist on going to the club where the rules originate so they do not have to kill people to satisfy their new, and unwanted, blood lust.

So in The Point I had one hot vampire, in Stopping Point I have three. I wonder how many I’ll manage to fit into Point Vamp Book three which I am going to write during the writing madness of NaNoWriMo in November? I have rather warmed to vampires and writing them. There is something addictive about them.

If you want to sample my vampires, you can find a free read at Total-E-Bound called To Comfort a Vampire. It’s a short story set at The Point.

Also, my story First Time Fang Bang which is currently in the Just One Bite contest at All Romance Ebooks is set at The Point. Please do pop over and read it then vote, if you wouldn’t mind. If you let me know you’ve voted victoria@ victoriablisse. co. uk (no spaces) I’ll se

nd you 2 more free reads as a thank you.

So, do you enjoy vampires? Do you have a favourite vampire or story involving them? Also how do you like your vampires? Do you prefer the traditional cross hating, sunlight burning vamp or do you like the more modern vamps who can vary massively from the traditional idea? Many of them can even withstand sunlight these days and have no problem with crucifixes at all. I look forward to hearing your views. Also if you have any other questions for me, feel free to ask and remember, if you comment you’ll be put in a draw to win a copy of Moon Shy. A perfect Halloween read!

Josh is a vampire he just doesn't quite know it yet.

He is confused and his voluptuous sire, Cara is far too busy being mysterious to really help him unlock the secrets of his Afterlife. However, he pieces it together by himself and decides to turn his best mates into Vampires too. This doesn't quite go to plan but he does discover The Point and its unique, ten-second rule.

Cara does not approve of Josh visiting The Point but that night she turns up at his door bloodied and much more dead than usual, and accepts Josh's help to escape from her much older and much crazier Sire Leopold. How is Josh going to defeat an older, wiser and more powerful vampire? He hasn't a clue but for Cara he is willing to find out.

“No, really, Larry, if you’re caught they’ll sack you. You know there’s a smoking corner
over the other side.”
“I know. Can’t be arsed.” He shrugged again and Josh walked up closer. Larry smelt
like a buffet of good meats.
“Whatever, mate, fuck off.” Josh stood directly in front of the short driver and looked
down at him.
Larry flicked the ash from his cigarette and stood stock still.
“I mean it, Larry, I’m in a fucking weird mood today and if you don’t move soon…”
Larry didn’t move and Josh couldn’t take the gnawing any more. He pounced and bit
into Larry’s neck. Larry moaned and pressed his body into Josh’s. He had a hard-on.
“Whoa, tiger, I like it rough but you know, take it slow.”
But Josh couldn’t take it slow. As much as the feel of Larry’s hardness on his thigh made him sick, he kept on sucking because the blood tasted like the best meal he’d ever had. He kept sucking and sucking and sucking until Larry slumped against him and the delicious taste stopped.
As soon as he stepped back, Josh was appalled at what he’d done. He’d killed a man.
He’d drunk his blood. He ran a hand over his face and sure enough, blood was smeared across his palm when he looked at it. He was a monster. He ran to the employee toilets and washed his face. When he looked in the mirror, he could see his teeth were bigger, whiter and fuck, fangs sat comfortably at the top of his mouth as if they’d always been there.
Josh began to put the pieces together and it all started to make some kind of weird sense. He was a vampire. The bitch last night had been one, too, and she’d not just sucked his blood, she’d obviously given him some of hers, as well. That’s how they made vampires,
Well, if anything he’d seen in horror movies was true, it was. So the steak smells, the cravings and the blood sucking of Larry the lorry driver were all connected. He was a fucking vampire. Shit.


Links to Victoria's contest and some of her books:


To Comfort a Vampire link:
http://www.total-e-bound.com/product.asp?strParents=&CAT_ID=&P_ID=850

Awww, thanks so much for such a lovely welcome, Lizzie. I'm thrilled to be here and have had great fun getting to know you too!

Thank you again, Victoria! Delighted you could come.

You're a new to me author. I'll definitely be checkng out your paranormal reads and I love the title First Time Fang Bang. I'm offto All Romance to read it.

Hi Anne, thanks for your lovely comments, I hope to get to know you more in future.

awesome post your books seriously sound great and the its vampire time made me laugh alottt liked the blurbs and the excerpts rocked ty for stoping in today! deffhave to check out ur work even more now

Hi Victoria!
Great excerpt to Stopping Point:) My fav stories are shifter stories so this one is definitely going in the wishlist. I've been voting for you in the Just One Bite contest... good luck!!!