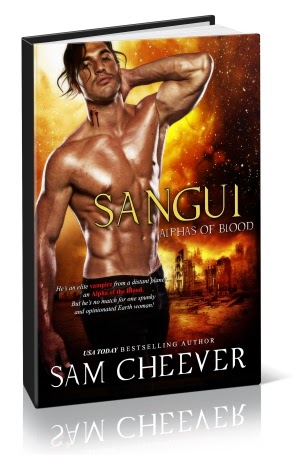 ISBN: 978-1-63443-418-8
Publisher: Electric Prose Publications
He’s an elite vampire from a distant planet…an Alpha of the Blood.
But he’s no match for one spunky and opinionated Earth woman!
The Alphas of the Blood are an elite, alien race of vampires. They escaped a devastated planet that was overrun with plague-infected beasts and came to Earth for a chance at a new life…a new beginning. The change is bitter-sweet for Zeenon Akba, who lost much of his family in the plague wars and fears his only brother might have carried the infection to Earth with him. But when Zee stumbles upon a pretty human female being stalked by an infected, he’s determined to help her, even if it means killing his own brother. Aware of their many differences and the necessity of finding a blood slave to be his mate, Zee doesn’t intend to lose his heart to pretty and spunky Brooke Carlin. So why can’t he get her out of his mind?
Posted by Lizzie at 5:24 AM