Once again, Sloane Taylor is steaming up eReaders with another spicy delight with the sizzling French Tickler.
FRENCH Tickler, book 5 and the last story in Naughty Ladies of Nice series by Sloane Taylor, is now available. 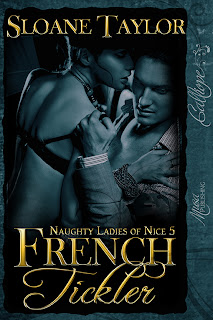 Lace and handcuffs...tools of the trade.


New Yorker Samantha Bradley has a fun, sexy career designing ladies lingerie. Now that her business is on the rise, she treats herself to a well deserved break on the French Riviera where the women are glamorous and the men are gorgeous. After a few days Sam is eager to sample more than just the local cuisine.


Cisco Bernier is France's key criminal prosecutor, but his courtroom charm falls flat outside the hallowed halls of justice. From family relationships to romantic trysts, his success rate is abysmal until a chance encounter with a sensuous young American businesswoman spins his staid world out of control.


Sam and Cisco sizzle together, but any future is threatened when their pasts collide. Her mob-connected father and his deceitful mother resurface and drag them into a corrupt world of lies and danger.


Sam tugged on the collar of her black blouse, fidgeted with her purse, refolded her shawl, and straightened the magazines on the coffee table for the third time, all the while she kept a sharp eye on the lobby door. She refused to check the clock over the front desk again. Cisco said he’d pick her up at the hotel, and she believed he’d follow through.


A tender sensation swept through her as she glimpsed a tall black haired man brush his way through the revolving door. Her happiness crashed to the marble floor when a blonde beauty, decked out in an off shoulder gown that screamed Donna Karan, wrapped herself around him like a cheap bath towel.


Patience turned to embarrassment that beat a hasty retreat from the anger building in her.


She hadn’t been stood up since she was fifteen. After her damned father ran off that hood wannabe Freddy LaFrano, the Italian guys had lost their balls. Not one of them asked her for a date again. The only guy who tried was a cute Irish kid. But the little wimp never showed. Now the French were bringing a new contingent to her international list of jerks.


She’d go out to dinner alone. Sure wouldn’t be the first time.


Strong hands clamped onto her upper arms, steadying her as she struggled to catch her breath.


His minty breath tickled her cheek. She almost purred, and all she wanted to do was snuggle closer into his cashmere jacket with his arms cuddled around her.


She swallowed hard, counted the pastel shades in her new summer line, then stepped away, calm and collected. Almost.


“Good evening, Cisco.” The sound of her husky voice came as a complete surprise.


“You look very beautiful with flushed cheeks.” He beamed a know-it-all smile as he wrapped his warm fingers around her arm. “Shall we go?”


The night air chilled her heated skin. Cisco clucked his tongue when she shivered. He deftly removed the pashmina shawl from her frozen fingers, then draped it around her shoulders. The fine wool warmed her, but not as well as his hands…

Sloane Taylor believes humor and sex are healthy aspects of our everyday lives and carries that philosophy into her books. She writes sexually explicit romances that take you right into the bedroom. Being a true romantic, all her stories have a happy ever after.


Her books are set in Europe where the men are all male and the North American women they encounter are both feminine and strong. They also bring more than lust to their men’s lives.


Learn more about Sloane Taylor on her website, and of course her blog for easy recipes. Stay connected on Facebook and Twitter.
Posted by Lizzie at 6:29 AM

You certainly have taken Europe by storm Sloane. Congratulations on another sizzling series.

Yes, I do believe Europe has been invaded by Sloane's super series! Hugs and cheers for a job well done. Now, take a breath before you hit the ground running with your next series!

Thanks, Lizzie, for the great promo opportunity.:)

Thank you, Sam, Susan, and Sharon. You gals are the best.:)