Monday Update and an Excerpt

Here it is Monday again!  June is almost over and half of 2011 behind us.  Can you believe it?

Looking back over the past few months, I came to realize I’d been pretty much spinning my wheels, especially on the current WIP.  Lots of going, but getting nowhere fast until the epiphany hit me on my Friday morning walk.  I’ve let too much negative into my thoughts for one thing and I need to go back to what I know on creating a book for the other.
I need to remember ‘thoughts become things’ and I’m not a total pantser.  I have to have a basic chapter outline as my roadmap to start with, but I can detour off that road when something better comes along.  So, I spent the weekend focusing on positives and creating my roadmap on the current book.  Not it’s time to finish it up today and then kick the production in gear.
In the meantime, here’s an excerpt from Beyond Magic to gear you up for the book that I’m diving into…the second in the Magical Love Series…Emerging Magic.
“Beyond Magic is charming, magical and fun; it kept me smiling all the way through to the most satisfying end! Can’t wait to see where the series goes next and with whom…” Marie Treanor, author of Blood on Silk 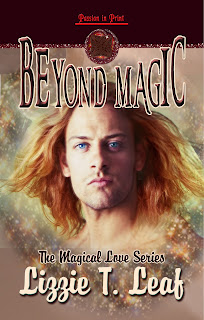 I really enjoyed this book...it was a good read and the characters were wonderful. Looking forward to book 2.

Thank you, Lisa. Hope you enjoy Emerging Magic when it comes out late August/early Sept.