You must think I'm friends with every author out there, but that's not the case. I am blessed to know (and count a lot as friends) a vairety of authors across the various Genres, and some I've known longer than others. Marie and I met when we both were newbies into the world of publishing at a house that no longer exists. Our interaction there resulted in not only a friendship across the miles, (she lives in Scotland...see how green I am...and I bitch a lot from Denver), but also a mutal love and respect of each others work. So join me today in welcoming the exciting Marie Treanor.


And Marie will draw one lucky winner from all the comments left today receive a copy of from her eBook backlist. You don't want to miss out on this opportunity, so make sure to at least say "Hi"!

Giving Birth to Blood on Silk 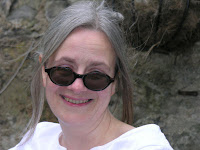 First, a big thank you to Lizzie for inviting me to blog today! As well as counting Lizzie a good friend, I’ve been a fan of her books since her very first release, so I feel truly honoured to be here, talking about the great excitement in my life right now.

What am I so excited about, you ask? My new book, of course. Although I’ve been writing for a while now, and have celebrated quite a few releases over the years, this one is something even more special for me. And not just because it’s my first release with big New York publisher NAL, but because it brings together three of my all time favourite reading-loves: vampires, gothic horror (you know the kind: all eerie ruins and brooding heroes and things that go bump in the night), and, of course, steamy romance.

Blood on Silk grew out of a scene in my head that had been there some time – a terrifying yet devastatingly attractive figure rising from his stone crypt and advancing on the poor woman who’d accidentally awakened him. I like my heroines to be intelligent, however unworldly, so the awakener became the academic Elizabeth Silk who’s making her reputation by exploding vampire myths. And the creature she accidentally awakens grew into Saloman, the most powerful vampire who ever existed and who was betrayed and staked three hundred years ago. Now he’s out for revenge and world domination, and because she awakened him, he needs Elizabeth’s blood to reach his full strength.

And then I thought it would be fun to follow Elizabeth and Saloman through more than one book, watching their relationship develop alongside his growing power and the efforts of his human and vampire enemies to stop him. And so the trilogy Awakened by Blood was born, and I’m delighted to tell you the first part, Blood on Silk releases in the United States and Canada on 7th September.

So, yes, I’m excited! And I’d love to share an excerpt with you – the scene that started it all off for me. Hope you enjoy it!


Scottish academic Elizabeth Silk is spending the summer in Romania researching historical superstitions for her PhD. While she is tracing local foktales, one subject in particular sparks her imagination. His name is Saloman, legend's most powerful vampire, a seductive prince staked centuries ago. Now, in the ruins of a castle crypt, Elizabeth discovers the legends are real. Her blood has awakened him. Her innocence has aroused him. But Elizabeth unleashes more than Saloman's hunger.

An army of vampire hunters has amassed to send Saloman back to hell. Sworn to help - yet fearing Saloman's deadly blood lust - Elizabeth seeks to entrap him, offering her body as bait. But something stronger than dread, more powerful than revenge, is uniting Elizabeth to her prey. Caught between desire and rage, Elizabeth must decide where her loyalties lie...and what the limits are to a yearning she can no longer control.

Leaning over the sarcophagus, she ran her fingers along the far side of it, but felt only the detailed outlines of muscled arm and hip and thigh, so lovingly carved that it felt intimate just stroking them. She stretched farther so that her hair and jaw brushed against the cold stone of his face, and felt along the table instead. It too seemed to be one solid piece of stone. So where the hell was the body?

Movement stirred her hair, almost like a lover’s breath on her skin. Startled, she jerked up her head, but before she could leap away, or even see what was happening, something sharp pierced her neck and clamped down hard.

She couldn’t move, couldn’t even cry out. Somewhere she knew she should be terrified, but in reality her brain was far too busy trying to work out what the hell had happened.

There was pain at the side of her neck where it seemed to be stuck to the face of the carved sarcophagus, a strange, cold pain that suddenly heated as whatever had gripped her began to suck.

Now the fear surged, deluging her. She felt the blood rushing through her veins, dragging from her heart, and knew she was about to die. Worse than that, the cold thing clamped around her neck grew warm, moved on her skin, and the rushing of her blood became a stream of weird, sensual pleasure. Fire and ice flowed together in her veins as she was held captive.

Everything seemed to tighten in her body - her muscles, her nipples, her clenching womanhood – until it came to her in a flash that this treacherous, paralyzing sexual response was killing her.

With a yell of as much self-encouragement as fear, she tore herself free, falling off the sarcophagus into a heap on the floor and scrabbling backwards away from whatever had attacked her.

She knew, she’d always known, it came from the sarcophagus itself, and yet the sight of the carving rising from the table in a cloud of dust drew a long, low whine from her that she couldn’t control. Her neck throbbed in agony; it felt slippery with her own blood under her questing, trembling fingers. Her heart hammered with the force of a pile driver, as the thing shook itself and emerged through the scattering dust toward her.

Not a beautiful stone carving but a beautiful, terrifying man, heart-churningly three dimensional as he yanked the broken sword from his chest and threw it to the ground. A sound seemed to hiss from between his teeth. It might have been pain, but right now, she didn’t care.

In the spotlight of her fallen, wavering flashlight, he regarded her from burning, coal-black eyes. His cloak, now streaked with black, fell around him in stiff, dust-laden folds as he walked forward with slow, deliberate strides. Beneath it, his clothing was torn across the chest, but no blood oozed from the sword-wound. His pale lips parted.

“Silly girl.” The deep, almost sepulchral voice vibrated through her entire body. “That’s no way to break off a relationship like ours.”

She scrabbled backward in a futile attempt to escape the horror, but inexorably, he kept coming…
Copyright Marie Treanor. This excerpt is from an unedited version and may differ slightly from the final, published version, which will be available on 7th September 2010.
Check out all of Marie's great books at http://www.marietreanor.com/news.html
Posted by Lizzie at 10:03 AM

OOOOH! Very nice! I love the cover art too. Wow.

Marie! I am as excited about Blood on Silk as you :) I cannot wait to see it in the book stores. I'll be sure to take pictures. Can't wait to read it. It's stunningly beautiful cover and vampire...oh my (gushing with pride, my friend).

Lena and Kara, you're both so right about the cover!

Kara, it's like our little girl has grown up, isn't it...LOL

Great to meet you, Marie! I love a new twist on the vampire tales, and your cover is gorgeous!

Oh thanks, Lena! Isn't it beautiful? I certainly got lucky there :)

Kara, thanks for being ALMOST as excited as me :)I'm touched.

Lizzie, I have to say, I don't FEEL grown-up yet, but I appreciate the setiment :)For you, I'll try!

Thanks, Mason - delighted it's caught your attention. And very pleased to meet you!

Great to meet you too, Helen, and thanks for the kind words. It was great fun to write :)

Sounds like an amazing read! Can't wait to get my hands on it. Thank you for sharing.

Thank you, T! And you're very welcome :)

Lol, Marie, well almost because I couldn't be as excited as you! I know what it's like to dream that dream - but not how it feels to have it come true :) that's why I said almost.

I'm wondering if I can twist your arm to send me a signed copy, lol.


P.S. who doesn't want to wait until it comes out in the states!

Ooh, what an excerpt, Marie! Thanks for sharing! Can't believe this is going to be available to us SOOOOOOON! :)

Actually, Kara, it's the other way round! It's ONLY out in the US and Canada in September. In the UK, we can get it through Amazon etc, but it won't be in the shops here yet:)

Congrats on your book with a New York publisher. Good luck.

Oh thanks, Loretta! I feel very lucky, but still have my fingers well-crossed :)

Thanks for the kind words, Cories!

Before I go, I'd like to thank Lizzie for having me here yesterday - thanks, Lizzie, you're wonderful! And thanks to everyone who came by and/or commented :)Great to meet you!

All the Best
Marie

OK, drum roll please! Finally remembered that I was meant to pick a winner :). So I got my daughter to pick one commenter at random, and she chose -

Congratulations, T! Please choose any one of my ebook backlist - you can check them all out at www.MarieTreanor.com/books - and let me know! Marie@MarieTreanor.com should find me.